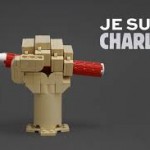 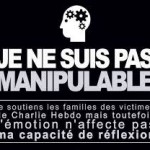 – that’s the question – whether it’s nobler in the mind to uphold your right to free speech whatever the consequences or to have some concern for the effects of your words in a highly volatile global situation – that is for the responsibilities that come with that right. So perhaps we should consider which tends to exacerbate terrorism and which is liable to further world peace. And who benefits from terrorism.
.
I totally condemn the killings – like any peace-lover – but that doesn’t have to mean I wholeheartedly condone Charlie Hebdo to the extent of identifying with ‘him’. If a bully in the playground beats up an arrogant little rich kid who has been publicly, and wittily, insulting the bully’s parents  – apart from totally condemning the bully – would it really be a great idea to parade about the school claiming to identify with the provocative victim. Surely only a hard-line fanatic would.
.
So. Just what are we identifying with along with the freedom of speech – the arrogant assumption of Western supremacy? (And why is this any more precious than the right to have boobs on Page 3?) If we want to exacerbate an already volatile situation then that’s a great way of going about it – but if we want to find ways of resolving the related conflicts perhaps it would be more useful to take a more considered and self-reflexive approach.
.
Rather than teenage-style identity politics perhaps we should stop talking about rights as though they were completely divorced from responsibility. Perhaps – as  in most relationships – we need to go beyond judging the other right or wrong. Perhaps, instead, we need to understand how we, the West, are contributing to the creation of a potentially terrifying situation through the structural/cultural violence of which mocking cartoons are just the tip of the iceberg.
.
And who benefits from hyping up the situation? Go ask Adam Curtis – I think he’ll know!
. . .
So. No, je ne suis pas Charlie – while in no way do they deserve the terrible attack and loss of life and they have every right to express their opinion – they do seem to have no respect for a deep and meaningful religion, or even any concern for world peace..

NB. This is the opinion of one member of Just York – not (necessarily).of Just York as a group 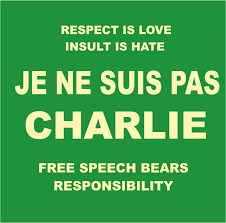