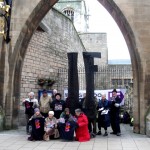 Here is an example of a letter to an MP about the G8 summit in June – feel free to use the text as the basis of a letter in your own words, and perhaps pick out  those questions that you particularly want an answer to.  For addresses of local MPs please see our Just Write to your MP page.

The Prime Minister and other members of the Government have said that revised tax regulations and protocols, are being drafted to ensure that profits made by global companies, such as Starbucks and Amazon from sales to British consumers, produce tax revenue in the U.K. Can you confirm whether it is the Government’s intention that the revised tax laws will serve as a template for equivalent laws in developing countries? If so, is the relevant Department acting in concert with its counterparts in developing countries? Will the revised laws be on the table at the G8 summit in the summer?

A report produced by the O.E.C.D. states that unless the G20 countries introduce such revised tax laws to stop endemic tax avoidance by global corporations, the burden of the cost of public services will have to be borne by medium and small size businesses and by middle income taxpayers. This unacceptable in this Country, but doubly so in developing countries with nascent industrial sectors and little or no middle class.

What can the U.K. Government do, and what is it now doing, to restrain former British colonies and crown protectorates – such as Bermuda, the Cayman Islands, Mauritius etc – from facilitating tax avoidance by global corporations? Do we have any residual rôle in their affairs, or any means of bringing pressure to bear on them, through the Commonwealth for example?

Of course any attempt to restrict financial activities in the ex-colonial tax havens could be said to harm their populations; but does the Foreign and Commonwealth Office know to what extent the indigenous populations would suffer as compared with the ex-pats and non-doms?’