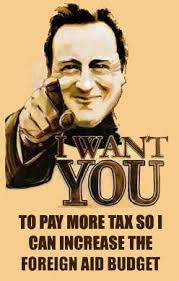 If you have ever been tempted, in the light of the Governments programme of running down and selling off the County’s publicly financed services, to think that UKIP may have a point in saying that ‘charity begins at home’ and that ‘overseas aid should be slashed’, then think again.  The Government is patently not offering charity. Apart from the relatively small amount of overseas aid that match funds money raised by charities like Christian Aid, the bulk of UK Government overseas aid takes the form of loans which attract interest and have to be repaid. The greater part of the UK overseas aid budget is paid over to the two vast global banking organisations: the World Bank and the International Monetary Fund.  Typically of financial institutions, the loans they make are conditional; they require borrowing countries to prune what public sector expenditure programmes they have and to sell them off to the private sector.  The same approach is taken with country-to-country bilateral loans.  One of the primary reasons conditions are so poor in many developing countries is that they are crippled with struggling to pay back decades old debts to rich – especially western – counties.  Some ‘ charity’ !!!!

It comes as little surprise to hear that the all-party overseas aid committee of the UK Parliament is now recommending that the Government should cease to offer any grants and that all our overseas aid should take the form of loans. Providing the interest charged is less than 7%, such loans can be described as ‘aid’.  Apart from aid which match funds money raised by Christian Aid and the like, UK Government Overseas Aid is not ‘charity, which should begin at home’ it is a ‘pay day loan’ to countries where the average wage is£600 per annum.