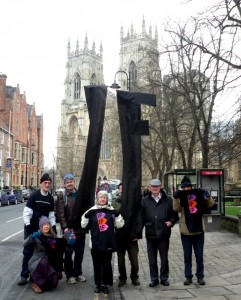 The IF campaign was launched today in York and in Leeds.

Just York campaigners joined with other organisations such as Oxfam, Fairtrade and Christian Aid to march from Coney Street to the Minster with giant 9 foot high letters I and F.

The launch took place in the heart of the city on the main shopping street, Coney Street. IF cards were given out to the public, before the campaigners marched to York Minster.

To end hunger, we need to tackle four big IFs:

IF we stop poor farmers being forced off their land and we grow crops to feed people not fuel cars.

IF governments and big companies are honest and open about some of the things that stop people getting enough food.

IF we give enough aid to stop children dying from hunger and help the poorest families get enough food.

IF we stop big companies dodging taxes in poor countries. 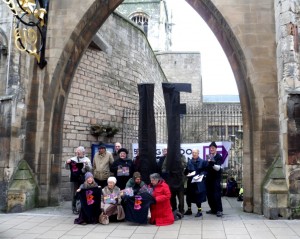 Many organisations in the city, including faith and community groups, have pledged to support the campaign and Honorary Freeman of the City of York, Joyce Pickard, gave her backing at the launch.

York Oxfam Campaigns Coordinator and Just York supporter, Mark Dawson, stated ” If this lively launch is anything to go by, then we are in for quite a year of campaigning. We have the chance to put the issue of food security on to the public and political agenda and ensure that everyone in the world has enough to eat.” 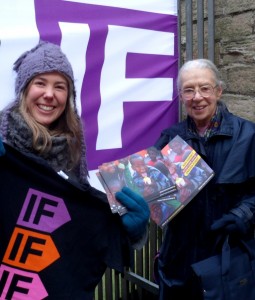 To find out more about Just York see our website www.justyork.org