Another little village in the rain in the Andes*,  this time even closer to the sky at 3550m. 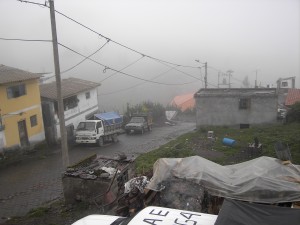 Although Ecuador seems relatively more advanced – its had a progressive government since 2006 –  villages in the Andes still cling to the hillsides in the drizzle, llamas and donkeys and people carry heavy burdens and farmers really do still scratch a subsistence living from the soil with a spotty pig grubbing in the scrub  – or they slash and burn for cash crops.  Generally they produce the raw materials for middleman to make the money.  Its beautiful and its cold.  It doesn’t look like anyone actually goes hungry ( though I don’t know the facts about this). 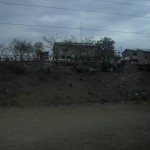 On market days  in Guranda, the nearest city, women come in from the villages in colourful traditional skirts and shawls, and smart black hats. (see picture way below).  In some villages they wear beautiful white hats which I covert shamelessly,  but I get the impression it takes more than money to own one.  It was in these women that I really felt a sense of the fragility of their culture, with their grace and dignity – even when squatting down to suckle a baby on a street corner –  and their initial surprise when I talked to them as if they had thought I was still on another planet.`

And their almost mystical ability to evade my camera ( which I’m sure extended to jinxing uploading the few gems I got). 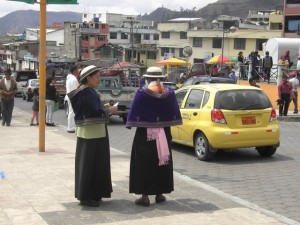 Women in Guranda in their beautiful hats

Everyone I ask says life is better here nowadays, and when I ask more they praise Rafael Correa – but avoid details.   But ‘youth’ still moves away to the cities for work and to live in sprawling favelas.  And while there seems to be enough to eat, producing the raw materials for others to process into profit still brings poor returns.  Most villages have one or two shops, dark little tiendas with a minimal choice of household goods and others with interesting looking agricultural things, and tyres.   But to wander around Salinas ( if you can walk at that height) can be a bit like entering an alternative reality, albeit a very cold one.  Particularly when you get to the chocolate factory.  And taste the hot chocolate!

In the Chocolate Factory

It seems round every corner there is another little factory – wool, textiles, soya, herbs, the best cheese, footballs … even salami hanging like a spooky  film set in a dusky basement and the pigs themselves waiting to meet their maker in the morning – all is clean and productive – and cooperatively run.  40 years ago Salinas-Cerca-del-Ciel was typically feudal, owned by a Colombian family, the Cordovez .  The only work was making salt, and subsistence farming.  Both grueling work in a cruel climate. They were dirt poor.  Then in 1971 an Italian priest set up several original cooperatives here, using Italian money – his work was followed up by the FUNORSAL** which organizes the 30 or so cooperatives now working in the area.  They also organise a network of local producers –  cooperatives and individuals –  who provide the raw materials to be processed in the tiny factories – with all the profits going back into the community.

Through this they have set up about 30 schools and training programmes.  So in Salinas there is not only work for artisans and farmers but also for university trained youths returning from the city.  They have even, I was told, made the machinery needed in the village and –  the icing on the cake –  they have developed a mini tourist industry with guided tours of the factories and information about surrounding sights – only a few kms away is a subtropical valley where much of the produce grows.  Overall its a sort of win-win-win situation.

The cooperative owns most of the land in the area as well as a good clean hostel with stunning views run by the local youth organization,  cooperatively of course.  The list of wonderful and inventive projects goes on and on – did I mention the radio station with, among much else, school programmes for poor kids on isolated farms.  Here there is probably the ‘highest’ proportion of youths in the world.

The first thing I saw when I first arrived was 20 or so young men playing football in the drizzle.  And more watching them, and more in the tourist office.  But for me there were two mysteries.  One was why had something so positive, that brought both abundance and community spirit to such a harsh environment,  why had it spread so slowly having proved itself for 40 years, I was amazed that it remained an isolated case.

The other question for me was where were all the women and how did they fit into the scheme of things. For while they certainly aren’t closeted away they didn’t seem to have the presence on the street that the men had, nor that the women in Maria* had.  And whenever I asked anyone, man or woman, how has it affected women’s lives and ask about equality everyone would go evasive and stress how life was much better for women now as they had more work.  I asked lots of questions –  I asked the woman in the gift shop – selling cooperative products (extremely good value and quality), I asked the woman who runs the community restaurant and the beautiful 78 year old woman I sketched.  And I asked the very charming and stylish woman I photographed (who I’m pretty sure had followed me for the express purpose of a photograph or rather of touching me for dollars afterwards).  And I asked my handsome tourist officer.   They all told me the same thing:  it has improved women’s lives immensely and there is plenty of work for women. ***

The only woman who says anything different is seling produce on the edge of the village.  She tells me life is always hard for women,  always has been and always will be and cajoles me for a dollar for a photo of her llama.

Portrait of a Llama - cost me a dollar

On my last day I realized a possible answer to both questions.  Hovering above the town, glowing against the black night clouds is a luminous cross.  The price the Salinasites have paid for their progress is their very souls.  Although Roman Catholicism is accepted throughout most of the region, it has been integrated into Andean life over the centuries.  I imagine the women in their beautiful white hats and bright shawls have their own version that’s been carefully tailored down the centuries to enmesh in their cultural lives.  But in Salinas, where my tourist officer stressed they are very religious, the women play a less visible role.

The Virgin Mary above the Salt Pans

But if in Salinas they have sold their Andean souls to a christian god back on the coast it is Mammon, take your choice.

*see my previous blog below

*** I also asked the internet which told me there were 2 organizations expressly for women.

And for the Finale

One thought on “La Gringa and the Ecuadorial Chocolate Cooperative”